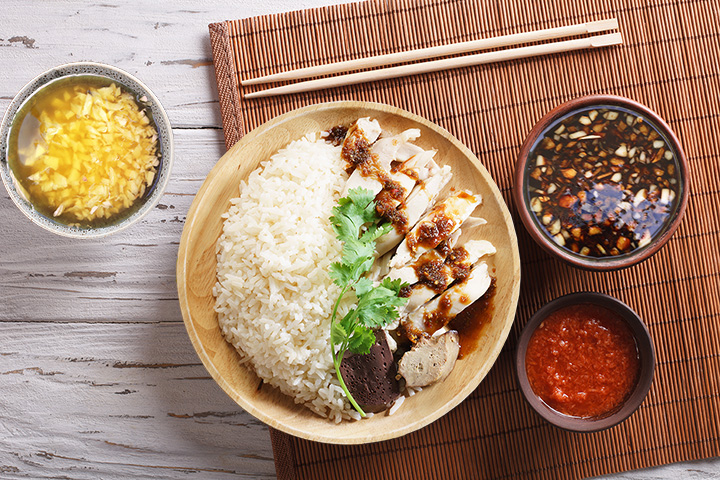 Ethnically diverse as its people, Singaporean cuisine blends Chinese, Indonesian, Malay, Indian and western influences. A visit to one of the shopping mall food courts or hawker centres will be as gastronomically gratifying as it is eye-opening. Here are some fine examples of Singaporean food available across the country, everywhere from swanky rooftop restaurants to humble street food carts and everything in between.

The dish serves steamed chicken with rice cooked in chicken stock. Hainanese chicken rice makes for a filling lunch. The quality of the chicken stock is extremely important to this dish, which you can tell by the steamed rice erupting with flavour and giving off a pleasantly fragrant aroma. Have the chicken rice with some dipping sauce.

Hard-shell crabs are cooked in partially thick gravy having a tomato and chilli base. The steamed crabs are then partly cracked and lightly stir-fried in a paste consisting of ketchup, eggs and chilli sauce. In spite of its name, chilli crab is not that spicy. Bread is mostly ordered to soak up the gravy as well.

A cross between Chinese and Malay cuisine, Laksa is basically rice noodles in spicy coconut curry soup with fish cakes, chicken meat, egg and shrimp. Laksa comes in several variants, but the one in Singapore is Katong laksa, its characteristic feature being cut-up noodles. Tofu puffs and cockles are also sometimes added. 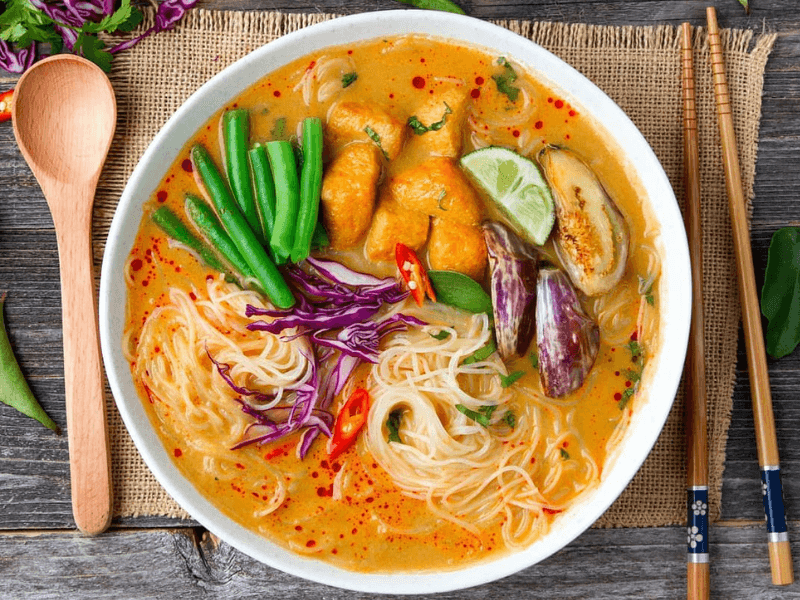 Char kway teow has broad white noodles which are fried in black Soya sauce with bean sprouts, clams, Chinese sausage and fish cake. This dish can be found widely in hawker centres and restaurants. Skilled chefs are also known to add a smoky taste to the dish by cooking the noodles at a very high temperature.

In this dish, Hokkien noodles are sit-fried with prawns, squid slices of chicken or pork, and fish cake. The mixture is then seasoned with vinegar, chilli and soy sauce. Each serving is provided with sambal sauce and a lime wedge, to reduce the oily taste. The Singapore version of Hokkien prawn mee uses thick, flat egg noodles.

This dish has become a popular seafood dish served at hawker stalls. Barbecued stingray originated on the streets, with its classic version featuring stingray meat slated in thick sambal sauce. Sambal sauce is a spicy condiment having chillies, diced tomatoes, and shrimp paste as the base ingredients. It is then wrapped in banana leaf and simmered on a grill.

As the name suggests, the dish features a big fish head cooked with vegetables in a curry and served with bread or rice, generally accompanied by a glass of calamansi or local lime juice. The origins of this dish are primarily South Indian, with Malay and Chinese influences. In some versions, tamarind juice is also added to provide a sweet-sour taste.